Releases from Lake Isabella went up and over 1,000 cubic feet per second yesterday – earlier than the milestone has been reached in the past decade. 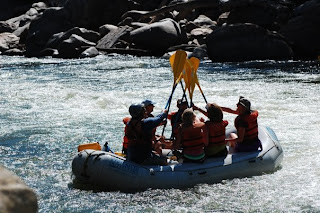 The Lower Kern River, fed by releases out of Lake Isabella, reached flows of over 1,000 cubic feet per second yesterday morning. Yesterday’s abnormally high release for this time of year capped-off a two-week span in which the outflow of Lake Isabella has increased daily. It also marked the first time in 12 years that the Lower Kern has reached the milestone this early in the year.

Cubic feet per second (CFS) is a common way of measuring water volume in a river. It refers to the amount of water flowing past any particular river point for every second. The Lower Kern River is considered “runnable” in a raft at flows above 500 CFS.

Whitewater rafting outfitters rely on the outflow from Lake Isabella for their Lower Kern rafting trips. “It pretty much dictates our season,” said Keith “Luther” Stephens, general manager for Kern River Outfitters. For the Lower Kern to see releases in excess of 1,000 CFS this early in the season indicates a very good rafting season ahead. “We’ve pushed our opening day trip nearly three weeks ahead of when it launched last year,” noted Stephens – “and with the snow pack we have, the season should go into September.”

Kern River Outfitters has been rafting on the Kern River since 1980. With a staff of over 50 professional river guides and support personnel, the company and its affiliate, Idaho & Oregon River Journeys, run one- to six-day river trips in California, Oregon and Idaho. For more information, visit http://www.KernRafting.com or call 1-800-323-4234.

Learn to be a whitewater rafting guide. The dates for our annual whitewater school has been set. This year we’re running the course over twop…

Season Update Our terrific snowpack is now paying off: Our Lower Kern season is going to be a long one with excellent flows. With the…

Please note: This post was written by Luther Stephens and was imported from our former blog platform. It has been kept for archival purposes. Anticipated…

Please note: This post was written by Luther Stephens and was imported from our former blog platform. It has been kept for archival purposes. WOFFORD…

Please note: This post was written by Luther Stephens and was imported from our former blog platform. It has been kept for archival purposes. The…

Marketplace, a radio show by American Public Media, sent reporter Jed Kim to spend the day with us during our guideschool. The episode aired yesterday…