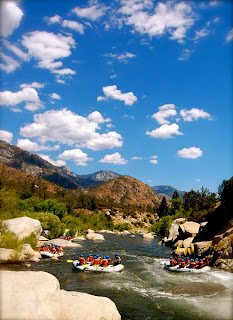 The Upper Kern’s water supply comes from natural run-off – not dam release – so flows fluctuate more widely than its downstream counterpart, the Lower Kern, which is fed by Lake Isabella. As temperatures rise in the early spring, the Upper Kern turns from a calm trickle to a raging river.

Keith Stephens, general manager for Kern River Outfitters, indicates that the 2011 season is going to be outstanding. “The storms that pounded Southern California and the Kern River drainage over the month of December have deposited enough snow to account for 100% of normal for the entire season,” noted Stephens – “ and with the snow pack we have already accumulated, we are guaranteed a fantastic year of whitewater rafting here on the Kern.”

Kern River Outfitters runs one to three-day guided commercial rafting trips on the Kern River in the Sequoia National Forest. Typically, the rafting season on the Kern begins in late April and runs through the first part of September.

Just a few hours outside of Los Angeles, the Kern River is an ideal river for families and first-timers, as well as seasoned river runners. It features whitewater rapids ranging in difficulty from Class II – V and there are numerous trip options, making the river suitable for everyone. Trips range in duration from two hours to three days, and in price from $60.00 to $898.00 per person, depending on the day of departure and length of trip. Group, family and non-profit discounts are available on all trip dates except for those departing on Saturdays. With more than 40 professional river guides on staff and over 35 years in the business, Kern River Outfitters is the most experienced and popular river rafting company that offers trips on the Kern River. For details, visit http://www.KernRafting.com, or call 1-800-323-4234.